This app could be the future of psychological therapy

To respond, you swipe to make a virtual face on your iPhone happy or sad.Welcome to the future of therapy.

What if we could use our phones to improve our state of mind, or even treat something as serious as depression?

If a Fitbit on your wrist can help you get in shape, why can’t a smartphone app teach you healthier thinking habits?

Ustwo, the design studio behind the hit iPhone game Monument Valley, has teamed up with a pair of tech-savvy psychologists to make a new app called Moodnotes that they think could usher in a new, more approachable model of delivering psychological therapy. 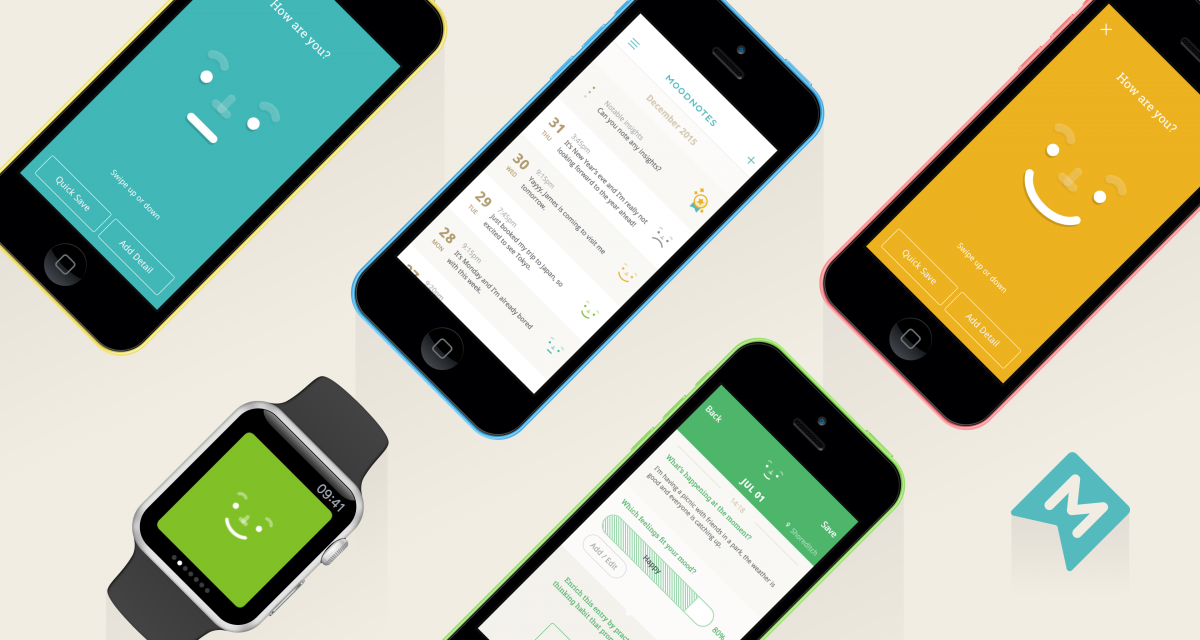 On the surface, it looks like a simple journaling app. But it offers more.

You tell Moodnotes how you’re feeling, and it charts your emotions over time. It gives you feedback on what you’re feeling and challenges you to think more positively about situations.

'When it comes to your mind and thoughts, you can't just put a sensor on that'

“Journaling is a social norm, but mental health has a massive stigma attached to it,” explains Ustwo’s Alana Wood, who led the development of Moodnotes, in an interview with Tech Insider. To combat the stigma, Wood wanted to make a journaling app designed for "increasing people's emotional capacity."

Notice the wording there. Moodnotes, which costs $3.99 in Apple's App Store, isn't just for people who feel depressed. It's designed to help anyone — whether they think they need help or not.

Once you tell Moodnotes how you're feeling, the app asks, "What's happening at the moment?" After you answer, you can choose to associate certain feelings with your mood, like relaxed or anxious, and then add varying degrees of intensity for each emotion. For example, you could be 75% eager, 80% motivated, and 25% lonely, all at one time.

The psychology behind the app teaches that life is more nuanced than we tend to make it. You usually aren't feeling just happy or sad. Emotions aren't black and white. 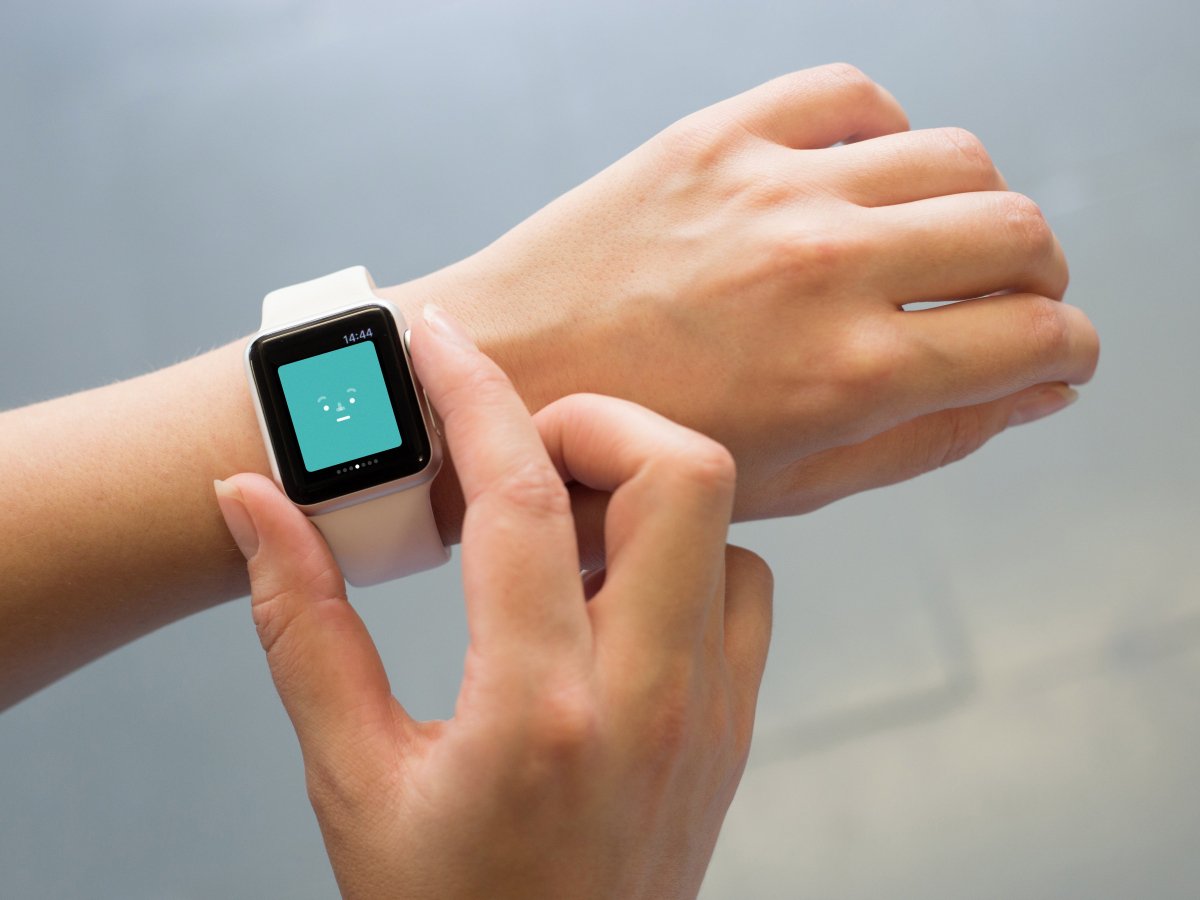 trap that's affecting your mood, it encourages you to rethink your situation without traps to see if that changes how you feel.

All of your entries are archived and shown in a "Moodtrends" chart. The idea is that by collecting helpful data about your mood, you'll get an insight into your own thinking patterns.

A hot trend in the tech world is the quantified self, or the idea that keeping track of and analyzing activities can help us be better, whether it's healthier, more budget conscious, or more productive.

A smartwatch can track your heart rate and tell you when you need to exercise more. Apps keep track of our spending and help us budget. A smart scale can record your weight, send it to your smartphone, and show you how your weight fluctuates over a period of time.

But analyzing your mind, it turns out, is a lot trickier.

“There’s a lot happening in quantified self with sensors and wearables,” Wood tells Tech Insider. “But when it comes to your mind and thoughts, you can’t just put a sensor on that. It really takes a commitment from the individual to spend some time reflecting on things. It’s through that time that you give to yourself that you start to learn more things about yourself.”

Wood and her colleagues at Ustwo have experience making successful apps — "Monument Valley" was one of last year's hottest App Store games, made a cameo in Netflix's "House of Cards," and won a coveted Apple Design Award. But to understand the psychology needed to make something like Moodnotes effective, they needed outside help.

“It’s a journal, but it’s been designed with a scientific framework behind it," says Wood. “While we knew we could make something beautiful and useful, we also wanted to make something credible.”

That's where Drew Erhardt and Edrick Dorian come in.

Erhardt and Dorian are early pioneers in merging mobile technology with mental health services. Back in 2011, they released MoodKit for the iPhone, an app that features guides and exercises on how to create healthier habits like building better relationships to becoming more productive.

When Wood and her team at Ustwo were looking for the science they needed to power Moodnotes, MoodKit was an obvious choice. It's the only app reviewed by the Academy of Cognitive Therapy, a nonprofit that certifies clinicians to practice cognitive-behavioral therapy.

“We were fairly frustrated with the fact that good, empirically supported psychological information isn’t easily accessible to people outside of the clinical arena," Dorian, a police psychologist, tells Tech Insider. “We’ve always thought of MoodKit as a Swiss Army Knife of tools. With this new endeavor, we are aiming to offer a very sharp knife.” 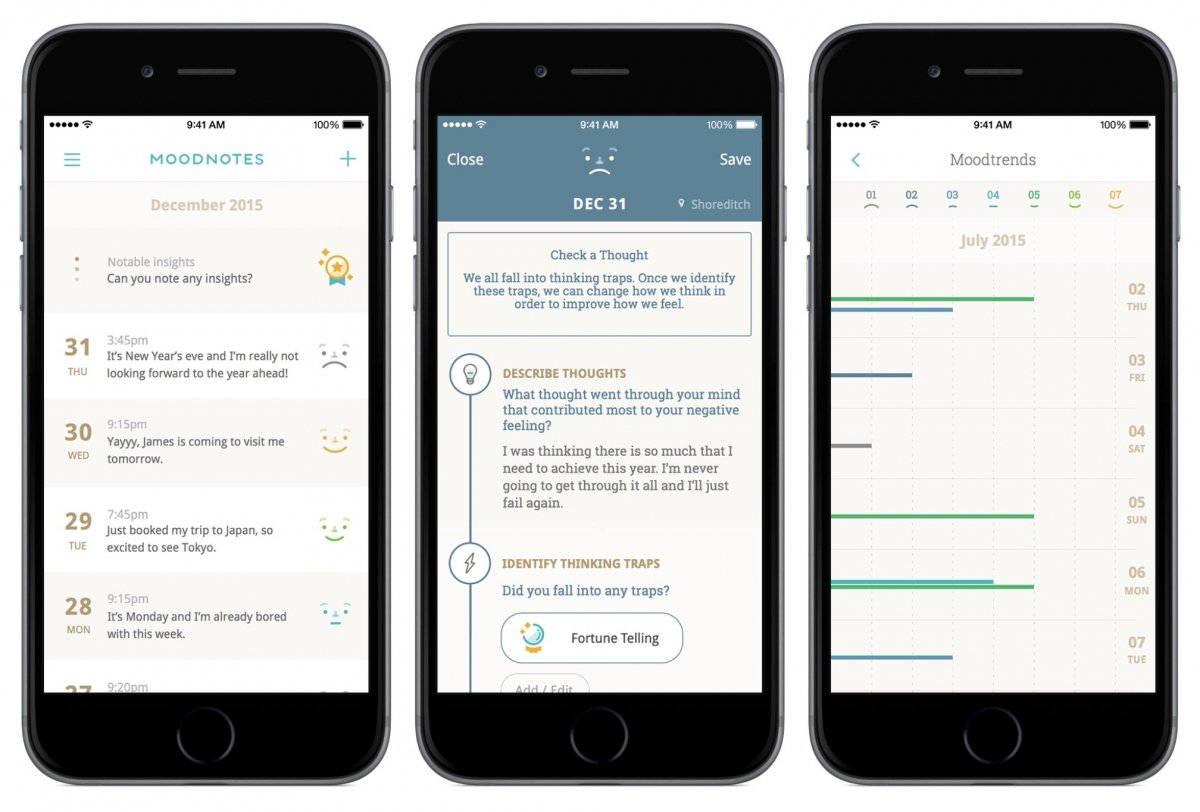 The particular kind of therapy Dorian and Erhardt espouse is called cognitive behavioral therapy. It's an evidence-based approach to psychology that judges what’s most likely to work based on scientific research. Instead of addressing an issue with medication, it teaches mental skills and ways of thinking.

Dorian and Erhardt stress that what they're offering isn't intended to replace pharmaceutical or one-on-one therapy with a human being. They see MoodKit, and now Moodnotes, as a way to supplement those more traditional ways of therapy with a model that can potentially scale to millions of people.

According to the World Health Organization, depression will be the most common disease globally by 2030. And a recent study published in the Journal of Medical Internet Research showed that smartphone use can help indicate when people are depressed.

On the other hand, a study published in World Psychiatry, the official journal for the World Psychiatric Association, says it's unclear if mental-health apps like MoodNotes have any real benefits.

“We're at a point in our evolution as a field where we realize that we need to generate some different models of getting our interventions to the people who need them," explains Erhardt, a professor of psychology at Pepperdine University. "There is a significant gap between the number of people who would likely benefit from psychological interventions and the number who actually receive them. Our current models of service delivery, for all their strengths, have some inherent limitations in filling that gap."

"The App Store is a perfect distribution channel for an intervention like this," says Wood. “If people learn something about themselves, whether it’s something that makes them happy more often or not, or it’s helped them unpack a situation from a different angle, I think it’s worth the cost of a cup of coffee.”